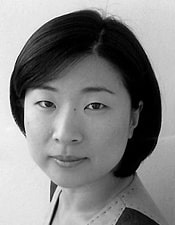 Sungji Hong was born in Korea in 1973. Her creative output includes works from solo to orchestra, choral, ballet, and electroacoustic music with special interest on timbre and pre-determined pitch structures. Sungji’s musical language is colorful with its imagery and exquisite delicacy.She graduated from Hanyang University in Seoul (B.A. Hons), the Royal Academy of Music in London (M.Mus.) and the University of York (Ph.D.).
Website: www.sungjihong.com
Pater Noster- Vanguard Premieres Contest 2006 (Honorable Mention)
Pater Noster (The Lord’s Prayer) is one of the episodes in an ongoing project called “The Life of Christ” that I began in 2000. Each episode consists of a chosen phrase from an important moment of Christ’s life described in the Bible. In Pater Noster, Jesus invites us to draw near to God who is beyond human understanding, who dwells in mystery, who is all holy. So we can call God “our Father.”  (Notes by the composer, 2006)
Pater noster, qui es in caelis: sanctificetur nomen tuum.
Adveniat regnum tuum. Fiat voluntas tua, sicut in caelo et in terra.
Panem nostrum quotidianum da nobis hodie.
Et dimitte nobis debita nostra,
sicut et nos dimittimus debitoribus nostris.
Et ne nos inducas in tentationem, sed libera nos a malo.
Quoniam tibi est regnum, et potestas,
et gloria in saecula. Amen.
Our Father, who art in heaven: hallowed be Thy name.
Thy kingdom come. Thy will be done on earth as it is in heaven.
Give us this day our daily bread.
And forgive us our trespasses
as we forgive those who trespass against us.
And lead us not into temptation, but deliver us from evil.
For thine is the kingdom, the power,
and the glory, for ever and ever. Amen.
Composers
Compositions