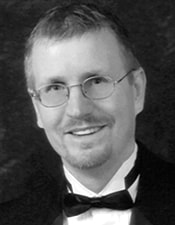 Stuart Scott received his doctorate from Ball State University in 1986. He has held positions in Ohio, Maryland, Indiana, and Michigan. He is currently professor of music and humanities at Macomb Community College where he serves as director of the Macomb Chorale, Belles Voix, The Michigan Caroling Company, and Macomb Chamber Singers. In addition to two commissions from Vanguard Voices, he has received commissions from: Ball State Chamber Singers, The Muncie Symphony Orchestra, Hazelwood Christian Church, Rochester High School, Skyline High School, and The Southfield Madrigal Chorale.
Season Sonnets - Vanguard Premieres Commission 2006
For several years I have been fascinated by sonnets. The rhyme schemes and different forms, while staying within the 14 line format, vary from author to author and poem to poem. The four texts selected attest to this variety. The ‘glue’ that brings them together is their respective titles, which reflect the four seasons.
The text for “Summer” describes a hot, muggy summer day/night. This movement has a lot of word painting set within a slow lazy tempo with just a hint of blues.
“Autumn” also features word painting, but in this movement the piano plays an idea that at times suggests rain and at others falling leaves.
“Winter” is organized according to the rhyme scheme of the poem. The choir is juxtaposed against the soloists. While word painting is not prominent, the mood is stark at times and empty at others, reflecting the season.
“Spring” is a joyful contrast to “Winter.” It is a very rhythmic movement with a meter of seven. However, rather than dividing the measures in regular groupings, the manner in which the seven beats are divided is constantly changing. (Notes by the composer, 2006)
Requiem Brevis - Vanguard Premieres Commission 2014
There is no greater privilege for lovers of the choral art than to sing—or be in the audience that hears—the premiere of a new work, especially one being performed in the very space for which it was conceived, by the very choristers for whom it was written. Stuart Scott’s Requiem Brevis was commissioned by Vanguard Voices to be sung here, at First Presbyterian Church, Dearborn. The composer observes that this “environment is unique in that it features 8 ‘faces’ open to the listening audience.” Thus, Vanguard Voices is arranged as eight a cappella choirs requiring over 50 singers to perform, sometimes in unison, more often singing harmonically and antiphonally, from multiple “faces” of the sanctuary. Requiem Brevis moves organically through the text of the Requiem Mass. One by one, voices rise from—and fade back into—an ethereal, chant-like murmur that hums, hovers, and shimmers throughout the sanctuary. Chorus after chorus sings… individually, overlapping, finally unified in—or by—or as—Light Eternal. (Notes from the concert program, 2014)
Composers
Compositions