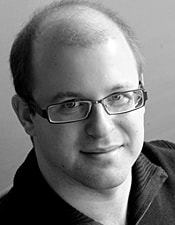 Scott Gendel (b. 1977) is a freelance musician whose musical activities include composing and arranging new works on commission, acting as a vocal coach and accompanist for professional opera companies and students, teaching private composition lessons, and serving as music director and pianist for theatrical productions. In 2005, Scott received his Doctor of Musical Arts degree in Composition from the University of Wisconsin-Madison, with a minor in Opera Accompanying and Vocal Coaching. As a composer, his music has a wide-ranging scope, but Scott is particularly fond of all things vocal and the artistry of the human voice in all its forms,
Website: www.scottgendel.com
The Last Invocation - Vanguard Premieres Contest 2012 (Winner - General Category)
When I first read Walt Whitman’s The Last Invocation I thought it was a lovely poem about wishing for a peaceful passing on, without conflict. And while that’s true, it’s also a poem full of conflicted feelings, even directly contradicting its own message. The more I live with this short poem, the more weight I give to the last two lines: “(Strong is your hold O mortal flesh, / Strong is your hold O love.)” It strikes me that Whitman is expressing, in most of the poem, an idealized version of his own death, a “glide noiselessly forth” that in reality is impossible, especially for Whitman himself. Even while he’s trying to describe that ideal, his overwhelming love of life shines through it, his love of earthly pleasures resonates in the sound of the words, his pure love overtakes that conflict-less ideal and infuses it with drama and passion and lust for life.
Following that interpretation, my setting of Whitman seeks to reflect that same contradiction, those words about peaceful wafting away engaged in a constant battle with earthly love and passion. So the choral textures are thick and lush with juicy, lusty harmonies, even when the text is professing to be simple and tender. The solo soprano line expresses that unfettered gliding towards the heavens, but is always pulled back into the choral texture by surging emotional outbursts of music. The lovely sound of Whitman’s language is lingered upon a little longer than is comfortable, so that the luscious sound of those words threatens to undermine their very meaning. Aching dissonances in the choral parts abound, and constantly tug at the texture, making sure it never simply floats away. And in the end, as in Whitman’s poem, the lovely vision of a peaceful, untroubled death is trumped by the power and beauty of love on this mortal earth. (Notes by the composer, 2012)
Composers
Compositions