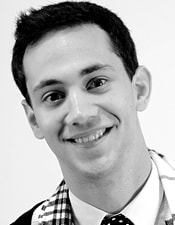 Sam Ritter (b. 1990) received his Bachelor of Music degree in Piano Performance (2012) from Union University, located in Jackson, Tennessee. He is a doctoral candidate at the Jacobs School of Music at Indiana University, where he has been the associate conductor for the premier contemporary vocal ensemble, NOTUS, the University Singers, and the University Chorale.

Website: www.samrittermusic.com
Lament Not, My Dearest - Vanguard Premieres Contest 2012 (Honorable Mention)
Lament Not, My Dearest is a setting of Requiem, a poem written by Christina Rossetti. I was introduced to other settings of Rossetti’s works and have kept a mental note of her passionate texts ever since my first encounter with her prose. This text lends itself to a wide variety of compositional styles. In this case, I’ve chosen a pensive, reminiscent interpretation.
Composed in ternary form, this piece opens with an introduction beseeching the audience to continue living as if the death of a loved one had never happened. A common tone modulation moves the piece into the B section where the torment realized is a tearing back and forth of one’s thoughts—personifying the pain lost in death. A lilting soprano and tenor solo marks the end of this section, funneling the listener into a loose recapitulation. The coda section of the piece is marked by a single pitch sustained on the word “forget” by the alto voices. Fragmented entrances of the choir paint the release and acceptance of the need for the continuation of life in spite of the passing of a loved one. It is followed by a satisfying sigh and liberation of pain which is depicted by the final tonic chord. (Notes by the composer, 2012)
Composers
Compositions