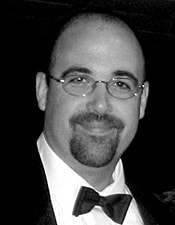 Ryan D. Neaveill, a native of lllinois, received his bachelor’s degree in music composition and theory in 1989 from Illinois Wesleyan University where he studied piano with Robert Bankert and composition with Abram Plum. After graduating from IWU, Ryan spent five years teaching piano and voice lessons at the Morton Academy of Music in Morton, Illinois. He moved to Champaign in 1994 and has been composing and teaching music in the community ever since.
Website: neaveill.com
Gloria - Vanguard Premieres Contest 2004 (Honorable Mention)
I first began composing this piece around 1993. I had plans to set the text from the Latin Mass in a very rhythmic style and can remember being influenced to a degree by some of John Leavitt’s compositions. I wrote a few measures in 5/8 time (the piano introduction and opening choral lines) but then got busy with other things and left it unfinished.
Several years later, in 2001, I was looking for some things to do with my church choir and as I was looking through some of my old pieces I found the unfinished score for Gloria and decided it was worth finishing.
I still liked the rhythm of the 5/8 meter but decided that the text “et in terra pax hominibus bonae voluntatis” (and on earth peace to men of good will) needed to have a more tranquil quality in order to convey peace, so I made that section contrast with the rest of the piece.
The version my church choir sang was slightly different. At the recapitulation of the main theme (m. 79), instead of singing “Gloria,” they sang “Hosanna” (using a slightly different rhythm) as this was for a Palm Sunday service; however my original plan was to use the “Gloria” text all the way through as it is here. (Notes by the composer, 2004)
Latin text: Gloria in excelsis Deo et in terra pax hominibus bonae voluntatis.
English translation: Glory to God in the highest and on earth, peace to men of good will.
Composers
Compositions