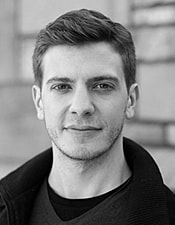 Michael Gilbertson, a native of Dubuque, Iowa, holds degrees from The Juilliard School and Yale. His works have been programmed by the Minnesota Orchestra, Pittsburgh Symphony, Washington National Opera, Albany Symphony, San Francisco Chamber Orchestra,  Grand Rapids Symphony, Santa Barbara Symphony, Virginia Opera, wind ensembles including The United States Marine Band, and professional choirs including Musica Sacra, The Crossing, Conspirare, and The Esoterics.
Website: michaelgilbertson.net
Two Medieval Carols - Vanguard Premieres Contest 2008 (Winner - Emerging Composers Category)
Two Medieval Carols is based on texts of unknown authorship dating from the late Middle Ages, which I adapted into modern English. “As is the Star,” a lyrical prayer to the Virgin Mary, begins the work with a hymn-like reverence in a largely a cappella setting. In contrast, “Make We Merry” is a joyous Christmas carol, the setting of which at times borders on a raucous drinking chantey. While the tunes to which these texts were originally sung have been lost to time, this contemporary setting attempts to capture the authors’ original intentions, as well as to reflect the unique poetic character of Middle English. (Notes by the composer, 2008)
Composers
Compositions