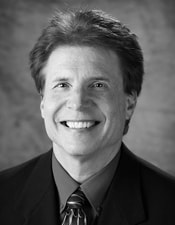 Dr. Mark Dal Porto has written for virtually all genres of music. He received his Bachelor’s degree in Piano Performance and Master’s degree in Theory/Composition at California State University, Sacramento. He received his Doctorate degree in Composition in 1985 at The University of Texas at Austin as a student of Donald Grantham. Since 2001, Dal Porto has been a faculty member, resident composer, and coordinator of Theory/Composition at Eastern New Mexico University.
When Your Song Rang Out to Me - Vanguard Premieres Contest 2004 (Honorable Mention)
The text of When Your Song Rang Out to Me is by the German Romantic poet Clemens von Brentano (1778-1842) from his drama Aloys und Imelda written in 1812. Having a love for the genre of German Romanticism was one of the primary reasons for selecting this text. The musical “style” that emerged from my setting however turned out to be more “American” in its prominent use of syncopation and “tall” harmonies (stacked 9th, 11th, and 13th chords). I found the mood of Brentano’s poem to be one of an exuberant love song which I tried to express in my musical setting of the poem. (Notes by the composer, 2004)
At Midnight - Vanguard Premieres Contest 2006 (Honorable Mention)
At Midnight is a setting of a text by the German Romantic poet Friedrich Rückert (1788-1866). A recurring melodic strophe (or melody) is used throughout to unite the five stanzas of text that are framed by the words “At midnight.” The work is scored for brass quintet, percussion (timpani, glockenspiel, cymbals, tam-tam), and mixed choir.
The introduction is played by the brass and percussion alone establishing a dark, melancholy atmosphere. Thereafter the choir enters and, for the first four stanzas of text, the music sustains its heavy, somber tone expressing anxiety too difficult to bear. However, in the fifth and final stanza, a solution is found causing the burden to be relinquished which changes the mood of the music entirely as it becomes more animated and triumphant in character. In this final stanza, a repeated rhythmic and melodic ostinato pattern is introduced (a derivative of the main melody) symbolizing the joyous pealing of morning bells soon to come that will eliminate all the grief felt earlier represented by the darkness of night. (Notes by the composer, 2006)
Composers
Compositions