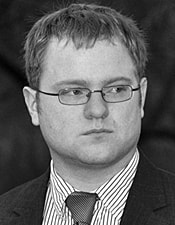 Mark Buller was born in 1986 in Maryland. He earned a bachelor’s degree in piano performance and a graduate degree in composition from Bob Jones University. He received his Doctor of Musical Arts degree from the University of Houston, where he studied with Marcus Maroney and Rob Smith. Buller has been commissioned by a wide range of organizations, including the Atlanta Symphony Orchestra and Houston Grand Opera.
Website: www.markbullercomposer.com
Sicut Cervus - Vanguard Premieres Contest 2010 (Winner - Emerging Composers Category)
Sicut Cervus is a setting of Psalm 42:1, in the version from the Psalterium Romanum. This well-known verse compares the deer’s desire for ‘fountains of water’ to the psalmist’s desire for God. My setting begins with an ostinato which never quite settles metrically; note values are constantly changing. Above this, the ladies sing the first half of the text using ‘blue’ notes to depict the deer’s desire. This desire, however, is contrasted in the second half of the verse; here, the word desiderat is set using dissonances more likely to be found in sacred music from the Renaissance, as if to show a more ‘chaste desire,’ in the words of Charles Wesley. The work ends on a slightly uncertain note (the tonic is not sung in the final chord), as if to depict man’s continued (and as yet, not completely requited) longing after God. (Notes by the composer, 2010)
Sicut cervus desiderat ad fontes aquarum
Ita desiderat anima mea ad te, Deus.
As the deer desires fountains of water,
So my soul desires thee, God.
Composers
Compositions