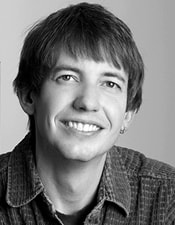 Marco Burak was born in 1967 in Edmonton, Alberta, Canada. In 1990, he completed a bachelor of music degree at the University of Alberta, then moved to London, Ontario for graduate studies at the University of Western Ontario. In 1994, he completed a master of music degree in composition. His teachers in composition/orchestration have included Peter Landy, Alfred Fisher, Malcolm Forsyth, Peter Clements, Alan Heard, David Myska, and Peter Paul Koprowski.

Website: www.marcoburak.com
Listen to the Music - Vanguard Premieres Contest 2006 (Honorable Mention)
I composed Listen to the Music especially for Vanguard Premieres Choral Composition Contest 2006. For the text, I turned to long-time collaborator Jen Frankel with whom I had written a one-act opera for young audiences. Jen’s poem bursts with dramatic images, contrasting with an island of other-worldly serenity. The poem celebrates the “music” of nature, both terrestrial and celestial, which I sought to capture in rhythm and contrasts of colour and texture. The piece begins loudly and tumultuously, suggesting the “music” of waterfalls and crashing waves. A quiet section follows, evocative of a scene on calm waters at night, with stars that “quiver like a river kissed by breeze in strange romance.” The final section begins loudly, recalling the rhythmic intensity of the beginning, but with a more overtly celebratory tone. The piece ends with the quiet invocation to listen.... (Notes by the composer, 2006)
Composers
Compositions