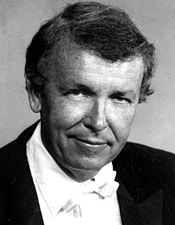 John White, Fulbright-University of Vienna Distinguished Chair in Humanities (2003-2004), was born in Rochester, Minnesota in 1931 and was educated at the University of Minnesota (B.A., Magna cum Laude). He also holds the M.A. and Ph.D. from the Eastman School of Music of the University of Rochester. For many years White taught composition, theory and cello at the University of Florida where he is Professor of Music Emeritus. He also was Professor of Music at Kent State University and Whitman College; and he has served as Visiting Professor at the University of Michigan, the University of Wisconsin, and the University of Innsbruck, Austria.
Olympiad - Vanguard Premieres Contest 2004 (Honorable Mention)
The ancient Greek poet Pindar (518-438 B.C.) was noted for his poems about the Olympic Games during Greece’s “Golden Age” period, The Age of Pericles. Indeed, John White discovered these poems in 2002 when modern Greece was preparing for the 2004 Olympics. Composed in 2003 and 2004, White’s Olympiad is scored for SATB chorus, brass quintet, timpani, percussion, and piano as prescribed by the Vanguard Premieres 2004 Choral Composition Contest. Thus, although the work is being premiered a year after the 2004 Olympics, it remains a tribute to the ancient Athenian games. The two poems used in Olympiad are “Jump” and “Discus” extolling the virtues of the athletes and of the Olympiad itself. Pindar was known as a “lyric” poet so his work lends itself to musical setting. Because modern singers usually do not read the ancient Cyrillic script, English “transliterations” of the poems are used in the score so that the singers can reproduce the sounds of the ancient Greek language.
The work opens with a fanfare-like passage which appears briefly again at the end. Although the two poems are in a continuous setting, the beginning of the second poem, “Discus” is signaled by a prominent passage in the tubular chimes, a gesture which also recurs near the end.
White, a prolific choral composer, uses many traditional choral techniques including imitative textures, melodic unisons, and hymn-like passages. Being an experienced choral singer himself, he strives to achieve choral lines which are both challenging and rewarding to the singers. (Notes by the composer, 2004)
Áriston men ídhor, o dhe hrisós ethómenon pir,
áte dhiaprépi niktí meghánoros éxoha plútu;
i dhiáethla gharíen éldhee, fílon ítor,
mikét’ aelíu skópi állo thalpnóteron en ámera;
faenón ástron erímas dhi ethéros,
midhé olimbías aghóna férteron avdhásomen.
Water is best, and gold, like a blazing fire in the night,
stands out supreme of all lordly wealth.
But if, my heart, you wish to sing of contests,
look no further for any star warmer than the sun,
shining by day through the lonely sky,
and let us not proclaim any contest greater than Olympia.
Composers
Compositions