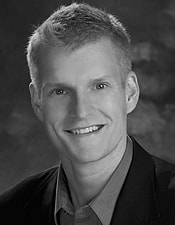 Jeffrey Cobb lives and works in Traverse City, Michigan. He holds a M.M. in Choral Conducting from Oakland University and a B.A. in Music Education from Western Michigan University. Jeffrey is the Director of Music Programs and Choirs at Northwestern Michigan College, Artistic Director of the NMC Children’s Choirs, and Director of Music at Traverse City Central United Methodist Church. In addition to his work as a conductor, Jeffrey is also a regularly commissioned composer.
Website: www.jeffreycobb.com
Observe the Wonders - Vanguard Premieres Contest 2008 (Honorable Mention)
Observe the wonders as they occur around you, do not claim them;
Feel the artistry moving through, and be silent.
This text, attributed to Rumi, is brief but powerful - it elicits many different images and emotions. My intention throughout the piece was to use the singers as colors on a canvas, painting clouds of wonder and inspiration. The text gradually reveals itself from the ethereal mist, then comes to the fore as the energy and intensity grow. Long pauses are included to dramatize the text “and be silent,” requiring the singer and the listener to be in the uncomfortable, and often unfamiliar, state of being truly silent. The singers are also asked to use other vocal techniques to create atmospheric effects or emphasize the text. (Notes by the composer, 2008)
Shout for Joy to the Lord - Vanguard Premieres Commission 2018
I was thrilled to be invited by Kevin to compose a piece for Vanguard Voices! I have been fortunate enough to work with Vanguard Voices before—premiering one of my pieces, and performing a shared concert with them. Knowing what an outstanding ensemble they were, and knowing Kevin’s amazing work at the podium, I jumped at the chance to compose for this excellent ensemble! The first step in any choral composition consists of selecting the text. Kevin was open to any ideas or suggestions I had, but mentioned that he was “particularly fond of the Psalms.” I start digging through the Psalms—when I came upon Psalm 98, I knew I’d found the perfect text for this project. I offered that as a suggestion to Kevin, and he agreed. I was immediately drawn to the idea of creating something that had an “Old Testament” sound to it—something that was powerful, moving, and that drew from music of that time and of that region. I did quite a bit of research and found inspiration in the Jewish Prayer Modes—specifically the “Ahavah Rabbah” (a scale with flattened 2nd, 6th, and 7th degrees) and the “Yischtabach” (a scale with flattened 2nd, 3rd, 6th, and 7th degrees). In the midst of my research, I was also drawn to the old hymn “The God of Abraham Praise,” based on the hymn tune “Leoni.” The fact that this hymn tune (named for the London Cantor Meyer Lyon) is a Christianized version of the Jewish hymn “Yigdal,” appropriated by Thomas Olivers, a contemporary of John Wesley, made it all the more intriguing and fitting for this project. You will hear “Leoni” quoted in the slower, middle section. Rhythmically, I was drawn to a motif that featured alternating bars of 6/8 and 3/4—you will hear this throughout the piece. I hope you will enjoy this piece as much as I have enjoyed working on it! (Notes by the composer, 2018)
Composers
Compositions