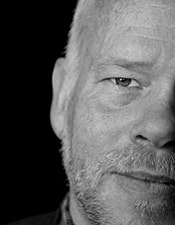 Jack Ballard, Ph.D. (Theory/Composition), has composed and produced music in a variety of genres, from classical and film music to jazz and bluegrass. He received B.A.Ed. and M.M. degrees from Central Washington and Eastern Washington Universities. His half-dissertation on hyperextended tertian sonority is from Kent State University. He presently teaches music production and composition at Malone University in Canton, Ohio. Ballard’s production company, Kiwibird Creative Services, specializes in production that develops popular and classical style integration, such as film scoring and eclectic CD projects.
Website: www.kiwibirdcreativeservices.com
Cherubim Bells - Vanguard Premieres Contest 2012 (Honorable Mention)
No. 15 in the oratorio Incarnatus Dei, “Cherubim Bells” is a chorus reflecting the ways God’s presence is made known to the writer in the uttermost stillness of winter. The choir, celesta, and percussion are played softest to bring out the sibilance in the voices, and mute the attacks of the percussion without losing the sonority of the latter. It uses several imposed meters underlying a strophic verse in a 4-beat feel.
(Notes by the composer, 2012)
Composers
Compositions