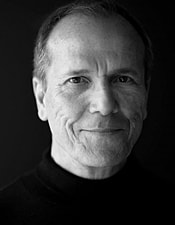 Drawing upon influences as diverse as Byrd, Stravinsky, George Crumb, and Arvo Pärt, Frank La Rocca’s music has been described as work of “luminous sacred introspection, transcendental effect, and breathtaking beauty” (Lindsay Koob, American Record Guide). His catalog includes works in nearly all genres, with a special emphasis on a cappella sacred choral works. Educated at Yale and the University of California, Berkeley, La Rocca was Professor of music composition and theory at California State University, East Bay from 1981-2014, where he was recognized on three occasions for Outstanding Merit as a Professor of Music.
Website: www.franklarocca.com
Eli, Eli! - Vanguard Premieres Contest 2004 (Honorable Mention)
Eli, Eli! was written in the summer of 2003. It is a setting of the first verse of Psalm 22, the prophetic precursor to Jesus’ cry from the cross just before he died. The piece weaves together both the original Aramaic spoken by Christ: “Eli, Eli lama sabachthani?” and the English translation, “My God, my God why have you forsaken me?” In this way, I hope to place the text in its historical context and to underscore for contemporary ears the power of the great spiritual anguish it expresses.
The piece embodies striking contrasts: from quiet, almost breathless utterances, to a powerful climactic cry of doubt and despair. My intent is to portray what I envision as both the outer and inner experience of Christ. (Notes by the composer, 2004)
The Divine Image - Vanguard Premieres Contest 2010 (Winner - General Category)
The Divine Image sets a remarkable poem of the same name by William Blake. The poem is a paean to the virtues of “Mercy, Pity, Peace, and Love.” Identified initially with God, Blake then works with an interplay of human/divine, locating these same virtues in Man (“the human face divine”).
In his attempt to deify the character of man he engages, for me, a Christological perspective. Although this poem may be read by many as strongly humanist in its focus, it is the Christological element that resonates with my reading, and—in the juxtapositions of text fragments I introduce—is the reading made explicit in my setting. (Notes by the composer, 2010)
Tread Softly - Vanguard Premieres Commission 2014
When Kevin Dewey proposed a commission to set this marvelous Yeats text, I immediately agreed both because I have had such wonderful experiences working with Kevin and Vanguard Voices and because the text he proposed was so perfect for a musical setting.
As I researched the poem and learned a little more about Yeats’ life, a picture of a young Irish poet of a romantic bent began to emerge. It is written in the voice of one of Yeats’ recurring character themes - a dreamer enchanted by love and the spiritual, the young man Aedh. There is, as well, an autobiographical element here, as many believe this poem was inspired by the unrequited love Yeats had for Maud Gonne, whom he met in 1889 when he would have been 24.
I realized then that this was a young man’s love song - and specifically a young Irish man - and so I have woven a short “Irish” tune (of my own devising) throughout the piece. This refrain helps both to anchor the structure of the music and to underscore the premise of the song: the young man could never, in fact, really give his beloved this heavenly gift, but he so fervently wishes that he could, he returns over and over to this thought. (Notes by the composer, 2014)
Composers
Compositions