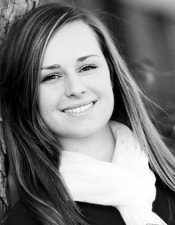 Erin Tomkins is a film, concert, and theatre composer.Her works have been performed in New York, Kansas, London, and internationally. Erin holds an M.A. in Film Studies from King’s College London (2018), an M.M. in Scoring for Film and Multimedia from New York University (2015), and a B.M. in Piano Performance and Music Composition from the University of Kansas (2012).

Website: www.erintomkins.com
Falling Snow - Vanguard Premieres Contest 2012 (Honorable Mention)
Amy Lowell was part of the Imagist movement, which strove to create precise imagery using concise language, while distancing itself from over-sentimentality. This piece takes the poem, Falling Snow, and creates the musical equivalent of the imagery in the work. The constant ostinati moving throughout the choir evoke gentle snowfall, and the whispering conveys the swirling wind as it moves from voice to voice. The distant, wintry harmonic language is at times broken by richer sounds that recall warmer emotions. (Notes by the composer, 2012)
Composers
Compositions