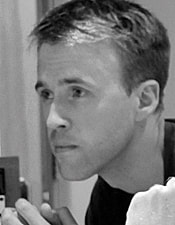 Erin Aas studied classical guitar, theory, and composition at the University of Washington and at Edinburgh University (United Kingdom). As a composer, he explores the harmonic richness and poignancy possible with an a cappella chorus. He is also an accomplished fingerstyle guitarist. His album, Arrival, a collection of guitar/piano originals, was #1 on the NAR instrumental charts for two months. Erin’s compositions have appeared on radio and television.
Website: www.erinaas.com
Alleluia - Emitte Spiritum Tuum - Vanguard Premieres Contest 2010 (Honorable Mention)
I conceived of the opening of the piece in 2007, before I had chosen the text. As with a number of my compositions, I allowed this musical idea to germinate until I found a text that matched its tone and essence. A verse from Psalm 103 provided just that: a simple passage that specifically served as an invocation to a higher power and lent itself to musical interpretation.
The piece begins with this invocation, the voice of the people asking their god to come forth. The remainder of the piece is an exploration of this theme that utilizes lush harmonies and contrasting parts, textures, and dynamics. I further explore contrast by setting a second similar alleluia (from the Roman Mass of Pentecost) in an entirely different, somber tone. I finish by revisiting the original idea in earnest. (Notes by the composer, 2010)
Composers
Compositions