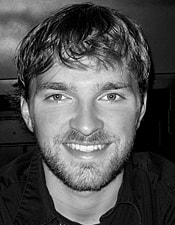 David Madeira (b.1982) is an internationally performed composer, worship leader, and university instructor based out of Nashville, Tennessee, where he serves as Director of Music at St. Bartholomew’s Episcopal Church. David also teaches music theory and worship studies at Belmont University. David holds undergraduate and master's degrees in Composition from Belmont University, and a doctorate in Worship Studies (DWS) from the Robert E. Webber Institute for Worship Studies in Jacksonville, FL.
Website: www.davidmadeira.com
O Magnum Mysterium - Vanguard Premieres Contest 2008 (Honorable Mention)
From the Latin matins, or morning prayers, of the Christmas season, the text of O Magnum Mysterium is a liturgical, responsorial prayer paying homage to the divine mystery of the incarnation of Christ. Many choral settings of this text have been done in the past; some of my favorites are by Poulenc and Lauridsen. Thus, it can be quite a challenge to set such an ancient text in a new way, trying to capture the feeling of the prayer in a way that is both musically appropriate and stylistically unique.
In my setting of this prayer, I wanted first and foremost to emphasize the “great mystery” of the Incarnation. In many other prayers and hymns this event is celebrated in jubilant praise and thanksgiving; in this text, however, the focus is more on the awe-inspiring otherworldliness of the event, and that is the mood I wanted to enhance in the composing of the music. I tried to make the music atmospheric, ethereal, non-traditional, and even haunting, while still conjuring more “human” elements reminiscent of the ancient Church. Atmospheric elements such as thick tone clusters and an overall tonal ambiguity are juxtaposed over passages in stepwise motion that are more chant-like in sound, reminiscent of plainchant and some Russian Orthodox chorales. The overall mood should evoke both the mystery of such a miraculous event as well as the beautiful simplicity of a baby lying in a manger, a musical depiction of the merging of the infinite and the finite, the human and the divine. (Notes by the composer, 2008)
Composers
Compositions