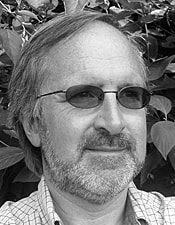 Chris Beardsley lives in Lancashire, U.K. His composing career began whilst studying music at Huddersfield University from 1989-92. Since then his works have been performed on a regular basis, including collaborations with the Hilliard Ensemble, John McCabe, the Apollo Saxophone Quartet, the Orchestra of Opera North, the Orlando Consort, the oboist Richard Simpson and the Goldberg Ensemble. His works have been featured at festivals both in the U.K. and abroad, including the Aldeburgh Festival, Huddersfield Contemporary Music Festival, the City of London Festival, the King House Expo 2002 in Ireland, and the Siljan Festival in Sweden.
The Lightener of the Stars - Vanguard Premieres Contest 2006 (Honorable Mention)
The Lightener of the Stars is a setting of the hymn Sorchar Nan Reul in an English translation from the Gaelic. The hymn appears in a collection of prayers, charms, and other poems and songs called the Carmina Gadelica that was collected by the amateur folklorist Alexander Carmichael (1832-1912) in the Gaelic-speaking regions of Scotland between 1855 and 1910. The music is flavoured by this Gaelic influence in the use of rhythmic effects such as “scotch snaps” (or “catches”), and drones (particularly in the organ). (Notes by the composer, 2006)