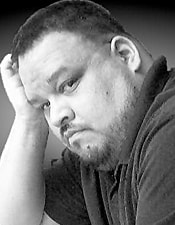 Antonio Martinez attended the Moores School of Music at the University of Houston, studying voice with the late Debria Brown and choral conducting with Dr. Charles Hausmann. The highlight of his college years was placing as a semi-finalist in the 2001 American Choral Directors Association’s National Student Conducting Awards. Antonio has served many Houston-area churches including St. Martin’s Lutheran Church (ELCA) and House of Prayer Lutheran Church. He also sings tenor with the Houston Grand Opera Chorus.
Tres Canciones Para La Madre Bendecida - Vanguard Premieres Contest 2006 (Honorable Mention)
These songs recall several church music styles: the first movement (“Ángelus”) begins with call-and-response, evoking a sense of worship. The men are the leaders, singing mostly in unison, while the women—the congregation—respond in harmony. The men cap off the first half with the word “Oremos” (“Let us pray”). The second half is the prayer, with all parts singing together.
The second movement (“Salve”) was conceived as a kind of organum, with a single melodic line moving over a repetitive bass. Instead of adding lines that paralleled the melody, the dirge figure was fleshed out harmonically, and the melody line was doubled at the lower octave. The only time this homophonic motion breaks is during a short bit of canon and polyphonic writing.
Taking up the polyphonic idea from the second movement, the third movement (“Ave Maria”) opens in full polyphonic texture in the women’s voices. A simple tenor line, accompanied by two-part soprano, marks the transition into the men’s imitation of the women’s polyphonic material. The final bars witness the reintroduction of the women, allowing the work to end in full choral splendor on “Amen.”
Since I am of Mexican ancestry, the Virgin Mother has been a tremendous influence in my life, a fact made even more astounding in that I am now a practicing Lutheran. But Mexicans learn from early on to revere our Blessed Lady. She protects us; she cares for us. She hears our prayers and succors us in our times of need. She watches us in our death, and she brings us to the Father, interceding on our behalf. She is Queen, she is Counsel, she is Mother. I dedicate these songs to the three most important women in my life, each one who has been a mother to me: my sister Elizabeth, who still buys her baby brother clothes; my mother, Esmeralda, who gave me the best thing a Sagittarian boy could have: total freedom while actually never having let go of the reins; and my late grandmother Eva, whose house was always home, whose kitchen was always warm, and whose arms were always open. (Notes by the composer, 2006)
I. Ángelus
El Ángel del Señor anunció a María
y concibió por obra y gracia del Espíritu Santo. Ave Maria.
The angel of the Lord appeared to Mary and she was conceived
by the work and grace of the Holy Spirit. Hail Mary!