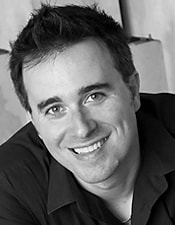 Born in 1973 in Lima, Peru, Antonio Gervasoni began his music studies at the early age of 5. In 2001, he was admitted at the National University of Music (formerly National Conservatory of Music), where he studied music composition with José Sosaya and piano with Teresa Quesada. He is a founding member of the Peruvian Circle of Composition (Circomper) and has been Director of the Music Department at Universidad Peruana de Ciencias Aplicadas - UPC, where he works as professor of composition, film scoring and orchestration.
Website: www.antoniogervasoni.com
A-nir - Vanguard Premieres Contest 2004 (Winner - Emerging Composers Category)
I began composing A-nir in April of 2002, as a work for my composition workshop at the National Conservatory. After thinking of the many possible sources for the text, I finally decided I wanted an old text, preferably 1,000 years old or more. I first thought of the Bible, but since so many composers have taken texts from the Bible, I decided to look for a different source.
A friend of mine suggested that I look for Sumerian texts. I had a book about Sumerian civilization and found an interesting text in it. After searching the web I finally found the text at “The Electronic Text Corpus of Sumerian Literature,” a page from the website of the Oriental Institute at the University of Oxford. The text is called “The Lament for Sumer and Urim” and is several pages long; the first three paragraphs correspond to the text I found in my book. I decided to use those three paragraphs and to my surprise I found the web page also included the phonetic text in Sumerian, which is called the “composite” text.
I found Sumerian very easy to pronounce and exchanged a few emails with the owners of the web page regarding copyright and information about the text.
My next step was to download a Sumerian-English dictionary, “The Sumerian Lexicon,” from the web. It helped me to make the correspondence between the words in the Sumerian and the English texts, which proved to be a very difficult task that took me about a week. It was after that that I began working on the piece, which was completed in two months. I called it A-nir, which in Sumerian means “lamentation.” I reviewed the piece in August of that same year, made a few changes, and gave the score its final touches.
I’ve always had a special interest in Sumerian civilization and studying a bit of their language has made me more and more interested in their culture. As far as I know, Sumerian is considered to be the first recorded language in history – older than Chinese – and I’m always excited when I think that the text I have used for my piece contains some of the first words recorded by mankind. (Notes by the composer, 2004)
ud shu bal ak-de ngish-hur ha-la-me-de
ud-de mar-uru-gin tesh-bi i-gu-e me ki-en-gi-ra shu bal ak-de ...
To overturn the appointed times, to obliterate the divine plans,
the storms gather to strike like a flood; to overturn the divine powers of Sumer,
to lock up the favourable reign in its home,
to destroy the city, to destroy the house, to destroy the cattle-pen,
to level the sheepfold; that the cattle should not stand in the pen,
that the sheep should not multiply in the fold,
that watercourses should carry brackish water,
that weeds should grow in the fertile fields,
that mourning plants should grow in the open country,
that the mother should not seek out her child,
that the father should not say “O my dear wife!”
that the junior wife should take no joy in his embrace,
that the young child should not grow vigorous on his knee,
that the wet-nurse should not sing lullabies;
to change the location of kingship, to defile the seeking of oracles,
to take kingship away from the Land, to cast the eye of the storm on all the land,
to obliterate the divine plans by the order of An and Enlil.
Composers
Compositions