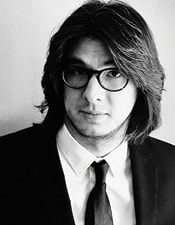 Four-times nominated as “Outstanding Classical Composer” in the Detroit Music Awards, most recently 2017, his music draws upon a wide variety of influences that range from the clean sonorities of Aaron Copland to the unusual tone color combinations of The Beatles, or unexpected blends of contemporary folk and chamber music heard on The Goat Rodeo Sessions. He is also influenced by the scores of old cartoon music by Warner Bros. and Disney, as well as film composers James Horner, Howard Shore, and Alan Silvestri.
Lai holds an M.M. in conducting and a B.M. in composition from Wayne State University in Detroit. He currently teaches courses in music theory and music technology at Henry Ford College and directs the Seaway Chorale and Orchestra in Trenton, Michigan.
Website: www.anthonylaimusic.com
Morning and the Mourning Doves - Vanguard Premieres Commission 2020
Morning and the Mourning Doves was written in April 2020 during the peak of the initial SARS-CoV-2 outbreak in Michigan. Two criteria for the commission helped shape the piece significantly, one regarding text and one regarding music.
The first was that it was to somehow connect to the global pandemic that, as of this writing, is ongoing. I knew I wanted the text to feel specific to the situation without overtly mentioning the outbreak or using the latest phrases like “social distancing” or “the new normal.” With the virus-related death of a friend occurring just days after the commission, it felt appropriate to blend the original idea of hopefulness with commiseration and frustration; and so the writing began. When finding the just the right words and tone proved difficult, the poem was finally completed with the help of my friend Lucy Alessio, a musician and poet in her own right.
The second consideration was that the piece was to first be performed as a “virtual chorus” performance amidst the pandemic. Individuals recording their parts in isolation to be combined later meant two things: one, that music too reliant on rubato for expressiveness would lose its effectiveness with a steady click track instead of a live conductor. And two, that too much meter change or unusual voice-leading without ensemble rehearsal would prove extremely difficult to get right.
You will notice areas of the music written with remote recording in mind, such as tempo changes that always occur a measure before rhythmic content to allow the click track to cue the new tempo. This ultimately resulted in a piece that took the different emotions of the poetry and explored each at a time: longing and sadness, frustration and despair, the hope of the future and comfort of the past, and finally returning to longing. (Notes by the composer, 2020)
Composers
Compositions