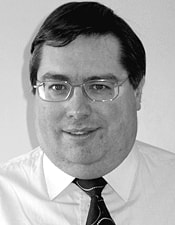 Alan Smith (1962-2017) was born in London and spent his childhood in Croydon. He sang with various local choirs and attended the nearby Royal School of Church Music, where he began organ lessons with Michael Fleming at the age of ten. He was appointed as Organist and Choirmaster of a local church at the age of 16, and later became Organ Scholar at Kings’ College, London. Alan’s works are predominately  choral and vocal music, much of it written for specific choirs or occasions, and his catalogue includes over 150 works.
Expanded biography: CanticaNOVA website
The Earth is the Lord’s - Vanguard Premieres Contest 2004 (Honorable Mention)
The piece is a setting of Psalm 24 and I have tried to create a work that reflects the energy and excitement of this text. I have also tried to echo the textual repetition in the way the music is structured.
The mood is initially set by the asymmetrical ostinato pattern on the organ (4/4 + 6/8 + 4/4 + 7/8), which is then taken up by the brass instruments. The voices enter, at first in unison, while the organ and brass continue with the introductory pattern. Almost all of this opening section is built over a constant pedal – a bottom C, the lowest note on the organ.
The music modulates to E major at bar 32. The brass group is silent and the organ begins a new ostinato figure, which exploits shifting accent patterns in bars of 7/8. There is a brief reappearance of the opening material, modulating to G for a restatement of the second theme at bar 56. New material appears at bar 68. The choir have a series of imitative entries, basically a cappella except for the fanfare-like triplets played by muted trumpets. Brass and organ are added to the texture as this section builds to a climax at bar 83.
The first section (arriving a little unexpectedly in C major) is then repeated, but instead of modulating to E, it leads to a new section at bar 102. The imitative vocal entries (“who is the King of Glory”) are similar to the earlier a cappella section, except that now the music is in 5/4 and built over a Bb pedal. The section closes with a homophonic declamation by choir and brass leading again to the opening music. This is basically a repeat of the music from bar 84, though the imitative vocal entries are now supported by brass. This time, however, whole bars of silence follow each statement of “who is the King of Glory”, adding to the dramatic intensity of the music. A brief coda begins at bar 136, using repetition to build the piece to a thrilling climax. (Notes by the composer, 2004)
Composers
Compositions